On Facebook the other day I saw a parody Who Wants to be a Millionaire graphic photo. The question in it says, “Nigeria is in…” The options to fill the gap were a) Africa b) Asia c) Europe d) Trouble. And the candidate ticked option D, Nigeria is in trouble! I usually try to ratio my laughter, to laugh only when it’s really really necessary, which is once a year, but when I read the above question I threw my cushion to the air and broke down, hohohohohohoho.

Is that your final answer?

Don’t you wish to ask the audience or phone a friend?

No sah… Nigeria is in trouble. 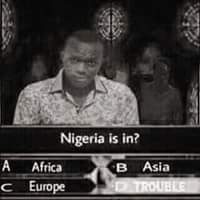 Stamped. I believe it is intellectual dishonesty to refuse to acknowledge the geographical metamorphosis of our Republic. It will pay us better to create a Map of Trouble and put Nigeria in the centre than continue to pursue the lost cause of forcing Nigeria to remain in Africa. Because every single day, something happens to show us that indeed we are in deep trouble.

You know we’re in trouble when the minister of information, Africa’s number one propagandist, Lai Mohammed tells us that they are downsizing their campaign promises to align with reality. Yeah, you promised to wed her with a gold ring if she accepts to marry you then on the wedding day, right there on the alter, you say, “Hey, gold rings are so costly, why not manage this plastic ring? From the bottom of my heart to you.” When she frowns you chide her, “Come on bae, a ring is a ring; it’s the heart that really counts. And you should be grateful I’m wedding you, you’re forty-two for God’s sake! You really must be grateful because your ex was so corrupt, incompetent, weak, clueless etc etc.”

Ok sir, go on, cut off half of the promises and dump them in the bin; edit the other half to suit this post-corrupt era. Meanwhile, fellow Nigerians, let’s continue to suffer while Lai Mohammed and Co continue to do us the favour of ruining us.

“Nigerians should be grateful that I’m their president.”

You know Nigeria is in trouble when people try to defend evil in their midst by pointing out evil in other places. The case of Yunusa who abducted, abused and impregnated Ese Oruru a 14 year old girl still wounds the heart. When the sane demanded that Yunusa pay for his crimes, some people tried to make it look like Ese is 17 and Yunusa 18, and make a Romeo and Juliet out of the mess. When this didn’t sell they resort to throwing stones, very dump stones.

“Yes, we have child brides in the North but it’s better than baby factories in the South East.’

We’re really in trouble when the governor of Kaduna, Elrufai, tries to regulate religious preaching. I have read some of the portions of his proposal and they stink, being a stark abuse of Freedom of Worship, and Freedom of Speech, and Freedom of Movement and Association. Nigeria is a secular state so I understand the need for government to draw certain lines. What I don’t understand is the requirement for preachers to have license before they preach. And for the preacher to stand before a penal of potbellied civil servants for screening to prove that she/he is qualified to preach in Kaduna State. If the potbellies are satisfied they will issue out the license. It’s really a temporary license because the preacher will return every one year to renew it. Any guest speaker coming to your worship must first branch to whatever silly ministry in charge of religious preaching to get a temporary license! Yes, you invite a bad musician like Vic O (or someone worse) and he goes straight to the club and start croaking, then you invite Pastor Kumuyi and he goes first to the bureaucratic channels for a license.

‘We are afraid Pastor Oyedepo, your license application to preach in Kaduna State is denied. Please call the next person when you get out.’

Our legislators don’t help matters at all. On Monday they began a public hearing for that nefarious social media bill. Frivolous Petition Bill they call it but it’s proposed to do the same thing, rob us of our voice. In defence of them there’s a lot of abuses going on on social media. Some people have sworn never to be reasonable and would abuse the hell out of any public figure.
“Excuse me sir, your head is not correct.”

But this is a worldwide problem. Ask Hilary Clinton and Kanye West. The fact that only Nigerian politicians are trying to gag their citizens says a lot about the priorities of our lawmakers. Our social media is basically the last hope of the common man. It brought this government to power, it exposed an erroneously embarrassing budget, it unchained Ese Oruru etc. We can’t sniffle the whole house because of a few crackpots.

Just like we can’t ban our senators because of “Senator” Dino Melaye who said that senators should patronise made in Nigeria girls, in the spirit of #BuyNaijaToGrowTheNaira. I don’t know how a person in a highly placed office can go as low as the gutter in so few words. I guess he meant it as humour but so many Nigerians are not rolling on the floor right now. The fact that all the senators are married shows the thought of Melaye is that of evil not good. His thought is that of stuffing girls into Sheraton Hotel to service gluttonous libido. His thought is that of girls as toys, with no emotions, that can be picked off the shelf and put to use. I remember Melaye’s last year in the House of Reps, how representatives loyal to Speaker Bankole beat him up, tore his clothes and bundled him out. I felt sorry for him. I no longer feel so sorry for him, and I have come to suspect that people like Melaye should be tapped once in a while. Spare the rod and spoil the senator.

But it wasn’t all bad news from Nigeria this past week. Two news particularly amazed me. The first is the Unilag chap who graduated with 5.00 CGPA. That means he never got a single B throughout his studies. What do you say about no one being perfect? In defence of reality I think there must have been a conspiracy among the lecturers to make a scape sheep out of the boy. He got so much A’s in the beginning that they began to guard him against B jealously, that it began cultural to score him A. The environment was more than enabling, the lecturers near angelically cooperative.

This is a sharp contrast from most other universities especially my alma mater where a lecturer would beat his chest, “I swear to Got no one can make A in this course.” He would proudly count the high percentage of F’s before rounding up with, “No one has gotten a first class in this department since 1786.” I am not sure Ayodele Dada will make second class upper among these talent sucking fanatically sadistic lecturers.

The second amazing news is that of the JAMB candidate who scored 399 out of 400. This one is not true, lai lai. Except JAMB is trying to test run their sense of humour, or pure computer error. Otherwise I say impossible. Yes, I believe 5.00 CGPA is obtainable because all you need is make an A is 70%. Not 100%, 100%, 100% and 99%. Lie. We all wrote JAMB and you know most times the answers are not in the options.

What is the capital of Nigeria?
A) Calabar
B) Uyo
C) Ikot Ekpene
D) Ikot Abasi

Now, you get the picture? But after enduring Lai Mohammed, Dino Melaye and UBA throughout the week I think we’ve earned the right to enjoy the 399 comic relief.

Enjoy. I am outta here.