Last week I rambled about my marriage narrow escape in 2015 to which I promised God a ram for thanksgiving; I mentioned how I could have jumped from a bridge and ended it all. Four days later a celebrity husband, fed up with marriage was atop a bridge and would have jumped and died if not for two musicians one of whom has the biggest head in the industry. Just four days after my writing! Three days before that I had posted a story about a couple who are in a hateful marriage but who remain together because society expects them to. Call me prophet; yes, what I see seated at my blogging desk so many profs have not seen sitting in their sixth floor well-polished American university office.

Yet I have never gone viral.

I am not making mouth, but except you’re an ex or Lai Mohammed, you know that I have written some cool stuff here, full of bacteria and worm, virus and fungi but ordinary viral I can’t go, something that some writers who cannot even spell hit back to back.

But God is stronger than Luci. I must get go virus in Jesus name, sometime someday. Can I here someone shout a loud amen. (If I don’t go viral before the end of this raining season I’m going to climb the flyover in Upper Iweka Road and jump. And if you try to stop me from jumping, no matter the size of your head, I will wound you when I come down. To be forewounded is to be forewarned. That’s by the way.)

So many things happened last week and I am still trying to make sense of them. You know Nigerians are omniscience. They know all. They are analysts, intelligence agents, reviewers, pundits, wedding planners, marriage counsellors, commentators, advisers and hypocrites. My guy once referred to Nigeria as a nation of Pharisees. My guy is right. On the one hand you have people shaming strong women like Linda Ikeji for not marrying, on the second hand you see them bash participants of a bad marriage. Hypocrites!

So on Thursday a celebrity husband came to social media and accused his wife of sleeping around, putting her career above his stomach and even called his mother in law a witch. Jesters in social media began to make fun of the woman and the men she was accused of sleeping with. There was little room for doubt.

Then the woman hit back. In an interview run by the worst journalist of the century, she called her husband a womanizer, a cheat, a drug addict, a criminal debtor, a burden etc. This time around “analysts” went crazy with tales of feeding bottle husband, fine boy broke asses looking for women to sleep with, live on and destroy.

I feel sorry for this couple but I feel more sorry for Nigerians as a nation. Earlier in the week there was an outcry against Fulani herdsmen following the killings in Enugu. But it was a restricted outcry done by mostly 5 percenters. So many people had nothing to say because it is not their thing. The fourth deadliest terrorist group on earth is on rampage, the president is “dealing” with them silently but it’s not ya thang. OK dear.

Imagine we used the same vigour and passion with which we do marriage analyses on pressuring the authorities on this embarrassing closures, perhaps, at least, one of the universities would have resumed. But it’s obviously not our thing.

Gossip is our thing. Other people’s personal business and private lives really agree with our genes. Government corruption and inefficiency at handling things as basic as budget bore us. Gossips and scandals are two of our best pastimes.

Of course I have something to say about this cracked celebrity marriage but it’s not in my first 200 priorities. Not even first 2000. I have a neighbour who smokes weed everyday, his liver and kidney are more of a priority to me. Or, let me just confess (you can’t kill me), commenting on celebrity wedding, marriages, breakups, makeups, reunions etc is not my thing.

Now this is not the kind of post that goes viral. But the good news, I don’t care. We still have four months of raining season.

This reminds me of Mourinho who having lost 3-1 at home to Liverpool in October, came to the post match press conference and kept saying “nothing to say” to every question thrown at him.

“Now Okechukwu, what can you say about the marriage everyone is talking about?”

“Do you think going to the social media is a justified way to air out frustration in a bad marriage?”

“Is depression a factor we’ve downplayed in broken marriages?”

“You really don’t have anything to say, you of all people? Or you wish to talk politics, seeing that the Enugu State governor went to Abuja to pay the president a condolence visit after Enugu was attacked.”

I said I have nothing to say! Please let me be. All I want to do is lie down, spread myself like a lizard and suck in this public holiday.

“And talking about holidays, isn’t it a nice thing to have this holiday on a Monday?” 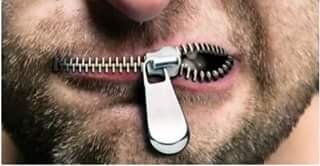 16 thoughts on “Ramblings Of An Angry Nigerian: NOTHING TO SAY”